Antarctica is still the preserve of the explorer even after nearly a century after the exploits of Scott and Shakleton. A team of 7 of us joined the renowned mountaineer Stephen Venables and Skip Novak in 2013 to attempt a new route up a mount Francais.

We were based on the 75ft sailing yacht Pelagic Australis and sailed from Argentina into the Southern Ocean to the Antarctic Peninsular. We sailed 1500 miles in the Southern Ocean day & night, navigating icebergs, multiple landings ashore and climbed and ski mountaineer 4 mountains and attempted 2 others. Ashore we were self sufficient on skis, pulling pulks and based in tents.

The choice of clothing in extreme environments is important. David is big fan of locally based outdoor clothing manufacturer Páramo and all its gear was perfect for the expedition.

A total of £2150 was raised for local charity The Bowles Rocks Trust providing outdoor education to underprivileged kids: www.justgiving.com/antarctica-davidmcmeeking 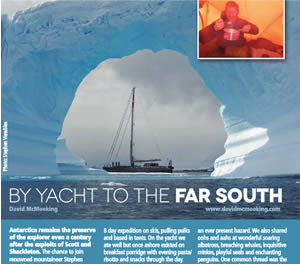 Antarctica
To the edge of the world by Nick Putnam